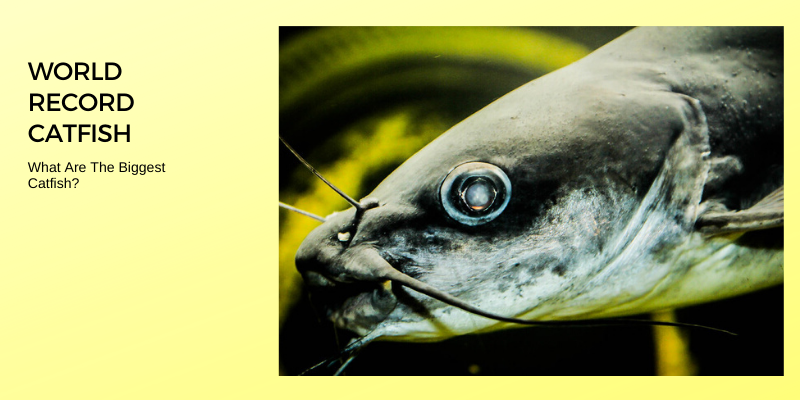 When it comes to freshwater monsters, there’s one species that stands out above all others in the United States. The much loved, and even more sought after, world record catfish. These can reach an astonishing size that leaves catfish anglers dreaming of hooking one they can brag to friends about for years to come.

But do you know what to expect? If not, keep reading…

In this article, we will cover some of the world record catfish that anglers have already reeled-in. As well as what to expect when trying to reel in a monster sized catfish yourself. We’ll even look at what bait was used to hook them. If you want to break a record, it’s always best knowing what’s worked in the past.

What Are The Biggest Catfish?

It doesn’t matter which of the three primary catfish species found in the U.S. that you want to pull in; there’s a record to break for each. However, if you want the biggest, badest monster out there, you’ll need to go hunting for a blue catfish. Well known to be the biggest of the larger catfish, the Blue Catfish is the primary species monster anglers chase after.

Before we jump into the top catfish monsters that have broken records in recent years. You will need to know how to go about getting one certified. After all, we all hear stories of so-and-so who ‘allegedly’ reeled in a Godzilla sized catfish. However, unless you can get the beast weighed on a certified scale. Then it will be nothing but a tall tale that people raise an eyebrow to.

What the angling rules for getting your record size catch officially recognized?

The International Game Fish Association (IGFA) requires all anglers to have their catches weighed on a scale certified by the governing body, and they will also need to supply pictures and even a line sample from the catch. There are other things to note as well, which are listed on the IGFA website, along with the world record application form.

A witness is also very much preferred…

It doesn’t matter the species; all fish must meet IGFA rules and regulations in order for the catch to be certified as a new world record. This helps keep everyone under the same umbrella regarding the rules, no matter where in the country the prize is hooked.

We would, therefore, recommend you take a look at the IGFA website before heading out. Thay have rules governing everything, and it would be horrible to hook a monster only to be disqualified on a technicality.

What is the biggest catfish on record today?

We will cover the world record catches for each of the three main types of catfish found in U.S. waters: blue, flathead, and channel catfish. However, the blues will get the majority of our attention, since they are the biggest and badest of the lot.

Also, note that the list is limited to the ‘All-Tackle World Records.’ This is because there are too many line class record holders to cover within the length of this article.

Starting with the current record holder, we focus our attention on John H. Kerr-Buggs Island Lake just outside of Clarksville, Virginia. Here, on the 18th of June, 2011, the man, who now holds the rank of legend, hooked a world record breaking blue catfish weighing an astounding 143 pounds. Can you even imagine how much work it would be to reel that sucker in?

This catch broke the previous record, which had stood since July of 2010, by an impressive 13 pounds.

Record holder, Nick Anderson, had been spending a nice Father’s Day Saturday evening out on the water with his father when he struck lucky. Anderson, who was a high school football coach in Greenville North Carolina, said that his Ugly Stik fishing rod was first twitching near Goat Island.

What gear was he using?

The Ugly Stik was equipped with a Shimano fishing reel and a 30 lb test fishing line. He did not disclose the catfish bait used to line such a monster, but he did admit that it took about forty-five minutes for them to wrestle the monster into their pontoon boat.

Only a few weeks earlier, Nick’s father Rick Anderson had pulled a 95-pound blue catfish from the same general area. Obviously, there’s more out there still waiting to be caught…

Where was it measured and weighed?

With no other options, they needed to take their catch all the way to Mecklenburg Farm Supply in Chase City, Virginia. This was because there were no scales in the area that could handle such a large catch for the official weigh-in. Unfortunately, the catch did not survive the trip. This is likely due to the stresses and handling that resulted from the long trip to the scales.

While the IGFA does generally prefer a catch-and-release style of angling, in Virginia, the blue catfish is classified as an invasive species in the tidal waters of the James River and Chesapeake Bay areas. Now known for holding numerous trophy class blues, state agencies have opened up commercial fishing in this area as part of a recent push by to eradicate them.

In July of 2010, Greg Bernal hooked a blue catfish that had stood as the world record up until the record-breaker we have just covered. Weighing 130 lb, this monster was a whopping 27 pounds heavier than the previous Missouri state record holder.

Some catfish seem to want to be caught…

Bernal has been using a slice of silver Asian carp as bait on the end of his forty-pound test fishing line. He was in the Columbia Bottom Conservation Area. The bite had taken place in the early hours of the day, around a quarter to one in the morning.

He claims the fish seemed eager to get in the boat, with the fight taking less than fifteen minutes. Though he said, it took another half hour to actually get it up into the boat. The boat landing took place a bit later at 1:30 AM.

Weighing an impressive 124 pounds, the blue catfish that Tim Pruitt caught back in 2005 had broken the previous records of 121.5 lb. Pruitt tells that the battle lasted nearly 40 minutes, at which point it surfaced and was pulled by the lower jaw into the boat.

Being a catch and release trophy catfish angler, Pruitt had intended to release it once he’d used his certified scale to measure the beast. However, being such a beast, he decided to allow Cabela’s to display it in Kansas City. Regrettably, the catfish died in transit.

Cody Mullenix managed to reel in a 121.5-pound blue catfish back in January of 2004. This was the first real monster to catch people’s attention. This beast became known as ‘Splash.’ This was not only due to its effect on the media, but also due to the difficulty which Mullenix had boating the catch.

Caught in the Hagerman National Wildlife Refuge straddling Lake Texoma, ‘Splash’ was successfully moved. And he ended up housed in a massive freshwater display in Athens, Texas at the Texas Freshwater Fisheries Center. From there, he drew massive crowds of tourists from across the U.S. with feeding displays to gawk at the monster catfish.

As you can see from the size of the following listings, blue catfish are much larger when compared to these other catfish species. While being trophy catches for their class, these catches don’t garner as much attention as those we’ve already covered. And for this reason, the information will be briefer.

Measuring 58 pounds, this channel catfish doesn’t even come close to the blue cats that we have looked at. Still, Whaley must have been beyond lucky to pull in such a large beast that has remained the record holder for well over 50 years.

For just over twenty years, the 123-pound behemoth that Paulie dragged out of the Elk City Reservoir has reigned as the world record flathead catfish. Though not as large as the current blue catfish, it does come considerably closer than the channel catfish record holder.

Perhaps one day soon, one or all of these records will be broken, but will you be the one that manages the feat?

Where Will The Next World Record Catfish Be Pulled From The Waters?

There’s no telling when or where the next big monster will be hooked. Hopefully, conservation efforts and practices of catch and release of trophies will allow for these monsters to keep growing, and keep being caught!

And finally, if you want to be a record holder, you’ll have to get off the couch and spend some time on the water. There’s no telling what you might reel in?

If you’ve enjoyed finding out all about the biggest catfish caught, you may also enjoy our articles on What is the best time to catch Catfish and How to hold a Catfish.