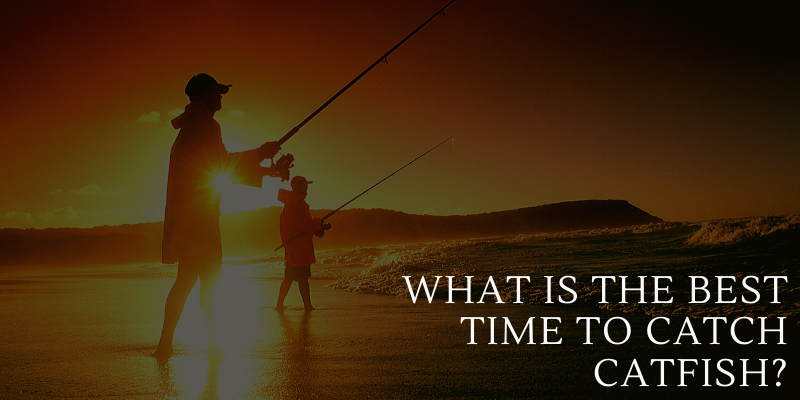 No matter how long you’ve been out there, and no matter the gear you use in the task, catfish anglers from across the world have all at one point asked themselves one question…

What is the best time to catch catfish?

Whether it’s the time of day, month, or year there are certainly times that you are more likely to catch your desired trophy. It doesn’t matter much if you’re heading out just to relax for the day, hook yourself dinner, or score yourself a prize winner. You will definitely have better luck if you follow our in-depth guide that will answer that all-important question

But before we get to the details. First, we will breakdown how the seasons affect catfish and, therefore, how you’ll need to adjust your strategy.

What to consider before planning your next trip…

You can generally find catfish all year round in most locations. This is good news, as it means you don’t need to wait before you head out on your next fishing trip. Still, some catfish species are more likely to be found at particular times of the year, and this is what we will cover first.

Yes, and no. Catfish across the United States behave in a similar fashion, no matter their specific location. However, local seasonal variations will undoubtedly play a minor role that will need to be accounted for. Climate is everything, so we suggest you speak with locals regarding conditions before heading out.

What species of catfish are you hoping to net?

There is no general rule that applies to all species of catfish. In fact, each species from blue to channel to flathead catfish should be targeted at differing times. Similarly, you’ll have to consider the seasons to determine the best time to pull greater numbers or larger individuals from the waters.

So, please keep reading to find out when to go fishing for the various catfish species…

With temperatures pushing open blossoms while melting any lingering frost, we all love being outside come spring. However, it is one of the more difficult times to reel in a catfish because of the very nature of the catch. After all, warmer weather tends to lead to warmer water, and this alters the behavior of catfish.

Spring is a transition period in the water…

This transition period, where the water slowly but steadily rises in temperature, affects all life below. During this time, catfish, along with many other underwater species, drastically change their behavior. Similar to us humans in many ways, with our winter and summer activities changing greatly as the sun warms things up.

Early spring will generally bring a greater frustration to anglers. And both inexperienced and seasoned fishermen alike find this period of change more taxing than others. While it will get easier with time to locate and pattern the seasonal transition, especially within a single location, it is best to head out with some specific pointers in place.

The fish are always biting somewhere…

It’s just a matter of finding that sweet spot. As the cold lessens its grip, the catfish shake off their lethargic winter habits, and their belly takes over. We’d recommend finding those special spots where the water has recently warmed as that is where the hungriest and most aggressive prey will bite.

Knowing all the above, it should be of no surprise that the time from late March through early May is perfect for netting blue catfish. During this time, you’ll likely have no trouble with catching record numbers, nor with hooking a monster of a fish worthy of a trophy.

They all will come out hungry…

Similarly, you should find hungry channel catfish fairly consistently during this time. Though flathead catfish will be the most active due to an almost inactive state they spend during the colder months. The flatheads not only need to put back the weight lost during the winter months. But, they will also be racing to stock up their energy level prior to the coming spawning season.

Summer Is Spawning Season For Catfish Too…

Most species of catfish spawn between early and mid-summer. Therefore, this is one of the best times for catfishing, depending on what you’re looking for. Channel catfish can be found in large volumes during the spawning season; you just have to keep up with them to secure a catch.

Blues can be a bit difficult to line during this period, but the flatheads are usually found in decent size numbers while spawning. In fact, this is one of the best times to catch flathead catfish on the larger end of the scale.

Have you ever gone angling at night?

There’s certainly plenty of hours in the day during the summer. However, the shorter nights offer a chance to beat the heat and fish in comfort. There’s also a well-known old myth that claims that catfish bite best at night. While we can’t argue for the validity of this myth. It can be said that the warmer bodies of water with a thermocline in late summer do tend to induce a tougher bite in the blue catfish.

Channel catfish keep a strong bite throughout the summer. This is also the best time for flatheads as well. With the blue catfish, the period following the spawning provides a generous opportunity to keep strong, hungry bites.

Between summer nights spent fishing under the stars, and days reeling in line after line, summer tends to be one of the best options for catfish angling.

The truth is that early fall can be a difficult time to line a catfish. Locating them during this time can be much more difficult, as they tend to move much more often and more quickly. This will be the case until water temperatures stabilize.

Come late autumn, and it’s time for the trophy winners…

Once the thermoclines have turned over, and the lakes have stabilized, you’ll find large numbers of catfish, including the prized trophy sized catfish. Beyond lake turnover, blue and channel catfish remain ripe for the picking throughout the fall.

As the temperature drops, flathead catfish will become ravenous in a last minute attempt to put on weight. Their desire to gain some weight to make it through the winter will definitely work to your advantage, as they feed heavily during this time.

Winter Can Bring You Trophy Blues…

The flathead’s bite is often an issue in the colder season, and while plenty may be caught during the winter, most of the more experienced anglers will look elsewhere during this time. Blue and channel catfish, on the other hand, offer great opportunities during the winter.

This is one of the best seasons to catch monster blue catfish in southern US states. In fact, this is regularly when you can pick up large numbers of blue and channel cats. And it is also the best time of the year for those looking to bag a trophy class blue catfish. It’s equally good for catching a large number of smaller catfish, so no matter your goals, there’re plenty of good days out there during the winter.

Deep and shallow waters are equally good for blue catfish in winter.

But What Is The Best Time To Catch Catfish?

Considering the above, it basically depends on what you are looking for. Catfish can be caught all year round, but if you want to have the highest chances of success, you’ll want to tailor your trips throughout the year.

So, keep reading for a breakdown of each species peak season…

There is a certain peak season for each kind of cat. And assuming that you have all kinds within your local fishing spots, with plenty of overlap, you won’t have any excuse not to go fishing. Using the following guide, we recommend switching up each trip to target specific species of catfish, depending on the season.

Blue catfish anglers split their seasons as spring enters. Starting around early March and pushing through mid-April is when anglers will have ample opportunity to pull in line after line. Some of these will even be of trophy size, though this may not be the best time to catch prize-winning blues.

If you’re looking for size, it’s best to wait.

It can be tough to pull in blue catfish during the spawning period, but come December through to March, and you’re much more likely to bag yourself that impressive catch everyone longs for. This is when the trophy size blue catfish are most often caught, and one of our favorite times to go catfishing.

It really doesn’t matter the time of year, channel cats can be pulled in by those who know what they’re doing. Still, the period wrapping the pre-spawn through to the time the water temperatures begin to drop in fall is the best time to catch channel catfish.

Spring and fall are also great times to catch your fill of channel cats. But the summer really brings out the red hot action that helps pull them in, and in vast numbers.

Springtime, from March through to May is an excellent time to pull in flathead catfish due to the pre-spawn period. However, September and October are even better. During this period, flatheads are feeding like there is no tomorrow so that they can put on weight for winter. This is easily the best time to line flathead catfish, as you’ll pull both the target numbers and likely the bigger fish as well.

So go catch a catfish, but first, check out our frequently asked questions section:

What’s the best bait for catfish?

Fresh bait is always the best option for catching catfish.

What are catfish sensitive to?

They have sensitive senses of touch and smell.

How important is catching Shad?

Time spent learning to pattern and catch shad will improve your angling.

When is the best time to stock the bait freezer?

Fall is a brilliant time to load up on bait for the freezers, for those that have difficulty locating and catching shad or other bait.

When is the best time to go Drifting, or drift fishing?

This is a popular way to pull in blue and channel catfish throughout the year, but especially in the Fall.

Does watching nature give us any clues as to the best time to catch catfish?

In some areas, when the cormorants arrive in numbers in mid to late fall, splat fishing can bring in some trophy class fish along with an adventure.

Which are the best areas for night fishing?

It’s best to focus on weedy zones and shorelines for the most consistent results.

What about Fish Finders?

Well, the easiest way to answer that question is to read our in-depth Best Fish Finders reviews.

So, When Really Is The Best Time To Catch Catfish?

Well, right now, actually. Or, whenever you’re next out there, as you’re not going to hook anything sitting on the couch. Plus, one of the best parts of fishing is that even days with nothing gained, are still more relaxing than days on the job.