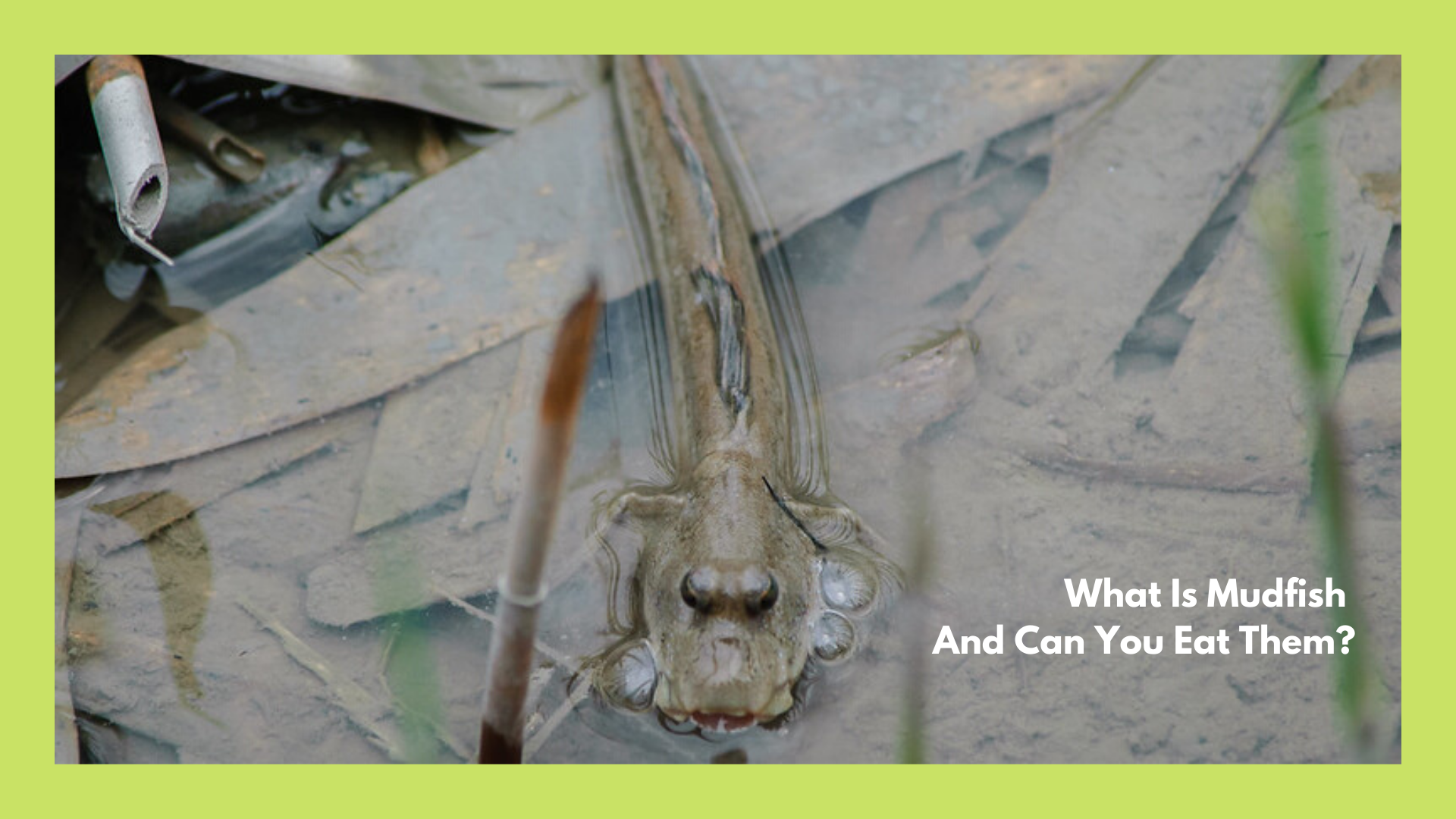 Have you ever had someone offer you a plate of mudfish for dinner? It certainly doesn’t sound very appetizing, does it? It may just be the name, mudfish, that makes us think we’d rather pass.

No one wants mud for dinner, at least no one we know. Just the same, there is more to this than how appetizing their name sounds to our stomachs. In fact, there’s been an ongoing debate among anglers regarding mudfish.

But can you eat a mudfish?

Some claim that their flesh is poisonous. Others that they are perfectly edible. Which is true? If they are edible, do they taste any good?

To help you to sort the facts from the fiction, we have done the research for you. Below we will discuss the mudfish. We will begin with a discussion on how to identify a mudfish, their preferred environment, and how best to catch one.

Then later, we will go over how to prepare a mudfish, and reasons you may or may not want to. This part is especially important if you intend to try cooking one yourself.

Keep Reading; There Is More To It Than ‘Yes, You Can Eat Them’…

Obviously, if we are going to discuss the preparation of a mudfish for dinner, then they must be edible. So, before we get into mudfish identification, we should clear up the essential question…

Mudfish are, in fact, edible. However, they must be prepared in a particular way. The reasons for this will become clear as you read the following sections on mudfish characteristics. So, just keep reading, and you will be completely prepared for the next time you reel in a mudfish.

After all, even if they are edible, you may still prefer to catch and release these once you know a bit more about them.

How To Identify A Mudfish

There was once a wide range of fish in the Amiidae family. However, most have disappeared over the eons. Today in the Mississippi River, the Bowfin (Amia calva) is what you will hook.

In other parts of the world, you may find one of the other species of mudfish, but most are becoming increasingly rare. This is due to habitat loss, which we will discuss in more detail below.

This is an ancient fish family, with origins tracing back to the Jurassic era. In fact, as far as we know, the mudfish is the last living species of the family. That makes these fish rather unique and helps to explain the confusion surrounding eating them.

How did this one species survive when all the others have gone extinct?

This is related to some unique characteristics of the mudfish. They are amphibious in nature, but they can actually survive out of the water as well. Their known tolerance to adverse conditions has helped them to survive.

Our focus will be on the Bowfins, found throughout the eastern parts of North America. These fish have a long, plump body. The tail is round, and there is a long dorsal fin. The bowfin does not have a pelvic fin, or if it does, it is small enough to miss. Its mouth is lined with large scissor teeth.

The tail fin of male bowfin has dark spots, while on females, these spots are either missing or hardly noticeable. The North American Bowfin has a green spotted color, though other types will have different coloring.

Most species of mudfish grow up to 20 inches (50 centimeters). As with many fish species, the females tend to be larger than their male partners in the mud. It’s not the norm, but some mudfish have been recorded as large as 40 inches (100 centimeters).

Their bottom half lacks scales, giving an almost eel-like appearance from that angle. But, their top half is certainly more fish-like, for the most part. While most mudfish have normal fish eyes, some subspecies such as the African Mudskipper has protruding eyeballs that retract into their heads.

What Characteristics Make The Mudfish Unique?

The mudfish is certainly one of a kind. They can pull oxygen from the water through their gills, as most fish do. But then they can also break the surface and breathe air.

Bimodal respiration in fish might make them too badass to eat…

This is accomplished with the use of their swim bladder. Lined with blood vessels, this swim bladder basically acts like a primitive lung. But, why would a fish need to breathe air?

This will be explained by examining their habitat. Mudfish are generally found in wetlands, swamps, drains, and lowland streams. It’s part of why they earned the name mudfish. These slow-moving backwaters generally have lower oxygen levels. This is due to a lack of water flow churning things up.

Luckily for the mudfish, they are perfectly adapted to these environments.

Their gills allow for gas exchange in the water when oxygen is available. The gas bladder helps with buoyancy and is connected to their pneumatic duct. When the oxygen levels of the water are low enough to kill most fish with aquatic hypoxia, the mudfish can surface and gulp air to survive.

That’s not their only advantage for survival…

Mudfish have been known to survive waters from 14°F to 75°F!

Where Can You Find Mudfish?

As we already mentioned briefly, mudfish tend to live in vegetated sloughs, lowland rivers and lakes, swamps and backwater areas, as well as brackish water. These areas generally have slow-flowing water and dense vegetation. This, in turn, produces low oxygen levels and warmer waters.

The mudfish survive where others cannot.

On Chatham Island in New Zealand, they even live in peat lakes. These black mudfish are found near Waikato, and nowhere else in the world. The loss of habitat in recent years has led them to be labeled as At-Risk/Declining on the New Zealand Threat Classification System.

We find it sad that we may finally lose such an ancient species because of the changes we have made to their environment.

Mudfish can survive for up to two months out of water!

It’s the only fish known to be able to do so. If their swamp dries out, they hide in vegetation to stay safe. When on the surface, the mudfish keep air bubbles in their mouths to help with air absorption.

If you ever catch a mudfish, you may notice they lay on their back when out of water.

This improves their perspiration through the skin and keeps the upper surface hydrated. We find this fish so fascinating we love to catch them just to study them. We still aren’t sure we want to eat one, though…

What Do Mudfish Eat, And How Do You Catch One?

Mudfish are stalking and ambush predators. They hang out in the shallows at night to feed on vegetation, smaller fish, and aquatic invertebrates like crawfish, mollusks, and insects of the aquatic variety.

For this reason, they are most active at night. At least the adults are, as the young tend to wander the day searching for food as well. It’s not the young mudfish that anglers want to catch, though.

The best time to catch mudfish is in late summer.

They will bite all year long, but in summer, the wetlands are generally pretty dry. This brings them closer to the surface and makes the catch that much easier.

If it isn’t hooked well, it will likely escape. In fact, it’s such a fighter that many people confuse it with a big bass. Their bite can be a bit nasty, so make sure you have it on the line securely.

In general, vegetative baits are the best choice for mudfish. They will attack different lures, and even worms if they are hungry enough. But small insects and vegetation make up their primary diet.

How To Prepare A Mudfish

Mudfish are a very interesting and unique fish. As is their taste. Now that you know what a mudfish is, and that it is, in fact, edible, we have one question for you.

There are a lot of small bones. These small bones and the unusual taste is what has led many to suspect the mudfish to be inedible. This is incorrect.

Mudfish are edible, just make sure to follow all the steps in preparing it. However, it may be best to speak with someone who has done it all before. Firsthand guidance is always the best. Still, we will endeavor to fill in the cooking guide here.

First, fillet the mudfish, using the best fish fillet knife currently available, but be aware of the numerous small bones. Then chop the fillets. When doing so, ensure you steer clear of the gut zone.

No one wants a mudfish that taste like mud…

Once you have the fillets, they will need to be soaked in salt water. This will draw the blood and muddy taste out of the flesh. Once properly soaked, just rinse and toss in a frying pan.

You can also poach, roast, stew, or bake mudfish. We wouldn’t recommend trying to grill or smoke mudfish as they aren’t an oily fish. The skin softens when cooked, which many people like.

We would describe mudfish as having a mild flavor, and not at all bad.

They certainly aren’t poisonous to eat. Though we still will keep these more for sport fishing rather than a dinner catch. Mostly due to their near endangered nature, but also because of the extra time and preparation needed to eat them.