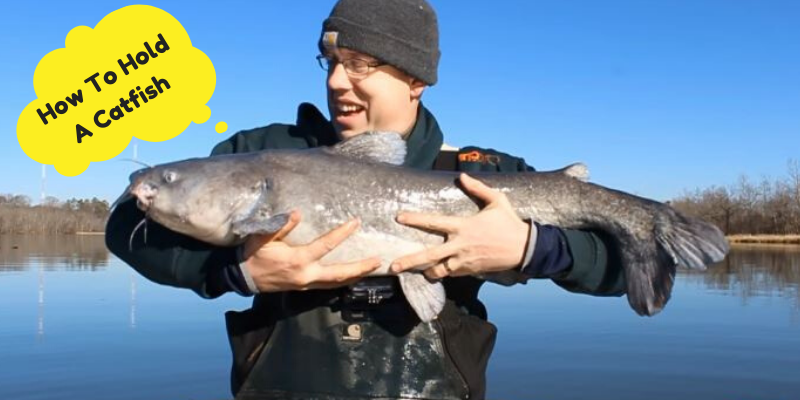 There ain’t much better than cooking up a catfish that you caught yourself earlier that day. But you’ll want to make sure that you aren’t surprised by one of their pointed tips. After all, once you have won the day by catching him in the first place, you’d be smart to ensure you know he doesn’t get a chance to hit back.

Catfish don’t sting, but they can cause you some discomfort when handled incorrectly.

It doesn’t matter if you are heading out for the first time. Or if you’ve managed to get someone in the past to do the dirty job of retrieving the hook for you. If you aren’t already an expert in this aspect, keep reading as we will break it all down for you in this helpful article.

What To Watch Out For

As we mentioned above, catfish do not sting. However, the pectoral and dorsal fins do have a sharp pointed tip at the end of the spine. This won’t sting you per se. As long as you are careful, you can touch these pointed tips without injury. However, they will cause you some pain or discomfort when they pierce the skin.

What happens if you do get caught by the fish’s spines?

It will hurt enough you’d best avoid it; in fact, it can hurt for days. This is due to the venom that is contained within these tips. This can cause swelling and increases blood flow to the area of the injury.

In fact, those smaller catfish that we’d rather not catch in the first place tend to injure far more anglers than the larger ones. This is primarily because larger catfish spines are often dull due to the stresses they’ve lived through. As opposed to smaller fish, which tend to have almost needle like tips.

Do all catfish have pain inducing spines?

Yes, but you should be especially careful with channel cats. These are known to get more people with their barbs than other species. As a general rule, by the time a catfish gets to about sixteen inches, the spines have dulled enough to limit the chances of getting finned. But if you follow the below guide, you’ll be good to go no matter what you may catch.

It’s during the release that most get finned

While you are unlikely to get done by fish larger than three pounds. You should be careful about letting go of the smaller ones when releasing them into the water or an ice chest. But before we get into the best way to hold a catfish, we should paint a clearer picture of where the pointy ends are.

Where Are These Pointed Spines?

Look for the front edge of the dorsal fin, which is on the fish’s back, and the pectoral fin, of which there are two; one on either side, with the spines protruding from just behind the head on either side. For this reason, we would advise you to keep your hands away from the front of the fins at all times.

It’s a myth that the whiskers will sting you.

However, you should be careful of your legs and any roaming kids or pets. This is because catfish will naturally extend their spines when removed from the water. It’s the fastest way to ruin a great day out, especially if it’s a little one that gets snagged.

How To Hold The Catfish Without Getting Stung.

When you snag a smaller catfish, just hold it by the line with one hand and then use the other to grip the tail. From here, you just slide your hand up the body of the fish until you have your hand resting against the back of the pectoral spines.

Next, you need to get a good grip to remove the hook.

You won’t have to worry about the spines rotating backwards, so you can use these to your advantage by placing the webbing between your thumb and forefinger, on the back of the dorsal fin. We’d recommend keeping your hand behind the spines, not in front of them. You’ll be less likely to accidentally run your fingers over them this way.

Don’t forget to be careful taking your grip; the fish will be wiggling around.

Then put your fingers aside either pectoral fin with your hand angled, so that your thumb and other fingers point in the direction of the fish’s mouth. Watch your fingers, keep them resting behind the fins, so you don’t get a prick. From here, you want to slide your fingers under the fish’s belly, then using your fingertips, gain a more secure grip with some slight pressure.

This will work for smaller fish, keep reading for tricks with larger catfish…

If for some reason, you can’t get the catfish from the back, you can try turning things around and approach from the other side. Place your palm on the fish’s belly and bring your thumb around, leaving a safe distance for the dorsal spine. Be precise with your fingers behind the pectoral spines, and pinch the firm bones behind each pectoral fin.

For medium-sized fish, these firm bones offer a great place to gain control where one hand might not be enough. However, if this is the case, be careful with bigger fish if holding them by this method. It’s a great way to have someone assist with removing the hook. But, be careful, the fish can still flap around and catch either of you.

Catfish can be slippery, even compared to other fish.

It can be a good idea to use a towel or rag to gain a better grip, especially as the river bottom mud can make the catfish even more difficult to wrangle. You should also keep a tight hold of the tail as long as possible. This is because you never know when the fish might make a last-ditch effort and thrash around.

When releasing, do so slowly…

We don’t recommend just tossing the catfish back in the water; besides being more risky, it’s a touch rude to the fish. It’s best to get your hand down to the water line, and gently loosen your grip in one, simple motion. Draw your hand directly up as you release, to make sure you don’t brush along the fish’s back.

For bigger catfish, the lip grip is often the best option.

Watch out though with these bigger fish, as once a catfish is large enough that the lip grip is required, their teeth are likely to be a bigger pain inducer than the dulled spine tips.

What To Do If  You Are Pricked?

We have three answers to this question, and you’re bound to disagree with one of them. If you or someone in your party has been fishing for cats for a long time, then you likely aren’t reading this. In which case, the last option may seem outlandish.

Our first suggestion is that you get to the hospital or a local doctor, especially if it’s the first time you’ve been nipped by a catfish spine. This is because, while rare, some may experience an allergic reaction to the toxins found within the spines.

The doc will also do a better job with cleaning and bandaging the wound to prevent infection. So, if this is your plan, just wash the affected area with warm water and antibacterial soap and apply light pressure to slow the bleeding. If there are any pieces of spine stuck in your skin, use some tweezers to remove any shards.

Don’t just ignore it; these wounds are known to get infected easily.

If it’s not your first sting, you can follow doctors’ recommendations and clean with antiseptic immediately, and hydrogen peroxide is beneficial, then cover with a clean dressing. It’s basic first aid, really. And to repeat an important point, make sure you get the tip out with tweezers before bandaging up.

Or, be disgusting and go old school…

We certainly won’t recommend this option. But we think it best you hear about it now rather than have some friend pull one over on you. Still, many will recommend rubbing the puncture on the belly of the fish for a few seconds, claiming this will stop the pain. This is then followed by the standard treatment of antiseptic cleaning and covering with a bandage.

This very much could lead to infection…

Some swear by it, but we’d recommend following the advice of a local medical professional. Catfish can be a bit difficult to deal with. However, they are more than worth it, and cat angling is one of the best ways to relax.

Hopefully, this has helped you understand the best ways to handle a catfish, so your day is not ruined by the critters pointy tips. You’ll get better and better the more you handle these fish, and soon you won’t even need to think about it.